Thanks to Claire at Word by Word, for finding this terrific flowchart on the website, Teach.com. It includes 101 titles and is designed to help kids find something to read this summer that might peak their interest. I see a few of them that have peaked mine already!

Via Teach.com and USC Rossier Online

The title is somewhat misleading because this is not a book centered on the abdication of Edward VIII, but more about those people on its periphery. I loved that the author approached such a well-known event from such a different angle.

The characters in this book were terrific. We have May Thomas, a recent transplant to England, who becomes a secretary and chauffeur for Sir Phillip Blunt. It is through her position that we are able to gain a unique perspective of the upper echelon of British society during those turbulent years preceding WWII. May is only 19 but is strong, self-reliant and kind and becomes invaluable to her employers.

Evangeline Nettlefold is our introduction to Wallis Simpson. Evangeline was a classmate and friend to Wallis during her years in Baltimore and is also acquainted with Sir Phillip and his wife Lady Joan, who is her godmother. Evangeline is so easy to picture because of the talents of Nicolson. Evangeline has never married, is hopelessly overweight and had a mother who found her an embarrassment. But through all this she is still a congenial person although a slightly bit socially awkward. She travels to England to stay with her godmother and reconnect with her old friend Wallis.

There has to be a love interest (outside of the Prince of Wales), and Julian Richardson fills that roll, as he becomes an object of desire for both Evangeline and May. Friends with the Blunt’s son, Rupert, he is more aware of the plight of Britain’s downtrodden and wants to be more than just idly rich. It is through him that we delve a little deeper into the social unrest that is gripping the country.

I really enjoyed this book and it’s a great read for anyone that loves period fiction.

Washington, DC is a foodies’ paradise. Most people who haven’t visited the nation’s capitol in the last 5-10 years might be surprised by that fact, but the number of amazing gastronomic delights are numerous and can please just about any palate or budget. I’m always excited to go for a visit so I can get, not only my fill of history, but also fill my stomach as well!

This time I was lucky enough to dine at Zaytinya, a José Andrés restaurant featuring a mezze menu of Turkish, Lebanese and Greek cuisines. It was a very special experience for lunch!  They featured a $22.00 four course luncheon that was beautiful as well as delicious, and the attentive service rounded out what has to be one of my favorite meals of all time.

Carrot and pistachio dish (my favorite) 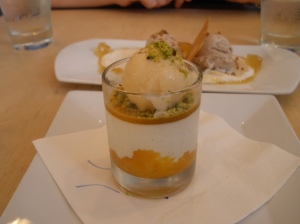 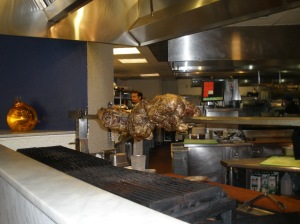 It was terrific to experience such fine dining at lunch time and not have it break the bank!

The Underground New York Public Library is a visual library featuring the Reading-Riders of the NYC subways. This library freely lends out a reminder that we’re capable of traveling to great depths within ourselves and as a whole.

I’m Ourit. This is my current photography project. I’m fascinated by how we apply ourselves to stories and discourse. In so doing, we shape who we understand ourselves to be. 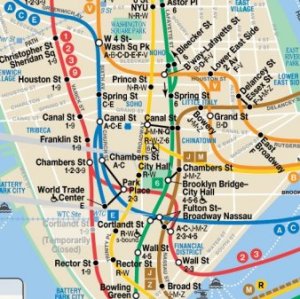 I’m just pleased to see that she is able to find so many riders reading the real McCoy and it gives me hope that e-readers haven’t taken over the world!

Even though I own an e-reader it will never be able to replace the feel of a book in my hands. The weight and heft, the way I like to fan the pages while I read and especially the unique smell of the old books I love so much.

But thanks to Berlin perfumer Geza Schoen and printer Gerhard Steidl we have a very unique way to make our e-readers seem a bit more book like, PAPER PASSION perfume!

The packaging, a book with a hollowed out center, was designed by Karl Lagarfeld and Steidl. Lagarfeld, it turns out, is passionately bookish, as can be attested to by the large amount of pulp in his office. Wow, that’s a lot of books! 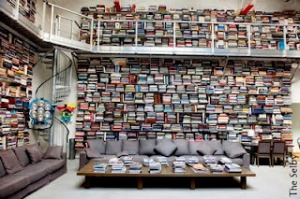 The smell of a freshly printed book is the best smell in the world.”

At $115 a bottle I know I will never buy myself any, but I sure would love to get a whiff of that scent. Or I could just stroll over to the bookshelf and crack open a book! 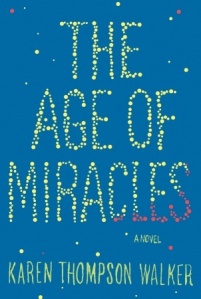 I’m so excited that I finally get to sing the praises of The Age of Miracles! I read this book back in January 2012 and I’m glad that it’s finally being released this coming Tuesday, June 26th, so I can give it the great review it deserves.

I don’t normally gravitate towards apocalyptic fiction for some reason. Maybe it’s because these books all seem to be somewhat similar in nature, same storyline, same characters, same terrible human race destroying itself. But just like that Sesame Street song, one of these things is not like the other, this apocalyptic novel is definitely not like the others.

Our story is told through the voice of 6th grader Julia, a typical 11-year-old girl going through all the usual emotional and physical changes that comes with the territory of being an adolescent. But she is also dealing with catastrophic changes to life on earth. as the planet’s rotation has started to gradually slow down.

With the slow down, the days and nights get longer and longer with devastating consequences for the world. Gravity feels different causing birds to fall from the sky, and the long days and weeks of light and dark take a toll on all living things. The government even tries to enforce a 24 hour day to keep the country on a schedule regardless of sunrise and sunset, but groups of people ignore this mandate and try to live on the new real-time instead.

In the meantime little Julia is trying to deal with her growing pains, boys, bras and the breakup of her parents marriage, all while the world around her tragically crumbles. Walker’s writing truly encapsulates what it’s like to be a teenager and makes this story so believable that it scared the pants off me.

She has truly written a gem with beautiful prose and a page turner of a story that I truly think will make it my all time favorite novel of 2012.

If you’re interested in getting on their email list so you will be “in the know” about the line-up of books for the second World Book Night, you can go to their website and sign up. I sure hope that I will be able to participate on April 23, 2013, it looks like a lot of fun!